John W. "Jack" Hill, Jr., known to some as the Indiana Jones of the Desert, was wandering the foothills near Palm Desert in search of the Holy Grail when he stumbled upon this important find. While inspecting a piled stone monolith atop a craggy peak, he looked down and saw on the high plateau the splendid stork figure among other as yet undeciphered symbols. If one looks carefully at this photo, one can see the stork figure to the left of the stone monolith.

Upon closer inspection, Professor Hill was surprised to note the fine detail and craftsmanship exhibited in the construction of this important find. To give the reader an idea of the scale of what must be included among pre-history's finest works of art, here the Professor poses with his discovery.

To further illustrate the importance and scale of this archeological treat, this photo shows much of the site, which includes pathways, eerie symbols and the aforementioned stork. The figure at the extreme left of the photo is Professor Hill's assistant and collaborator, the lovely Miss Lorri Laroo.

Please note that this archeological site has yet to be excavated and studied carefully by Professor Hill and his crack team of archeologists. Its location must remain secret to prevent hoards of looters, sightseers and stork worshippers from over-running it. 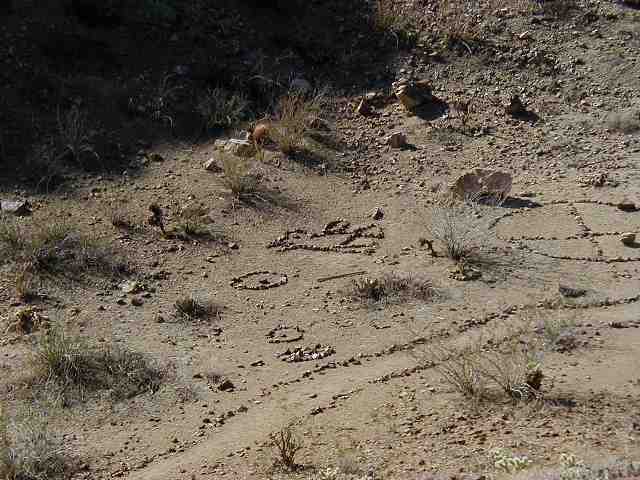 Important note: some of you may not know this, but Jack Hill has at times been known as Stork or the Stork and the Stork logo (which bears an eerie resemblance to the rock formation above) has appeared on countless office football pools, memos, party invitations, wanted posters and other places too numerous or too unmentionable to mention.